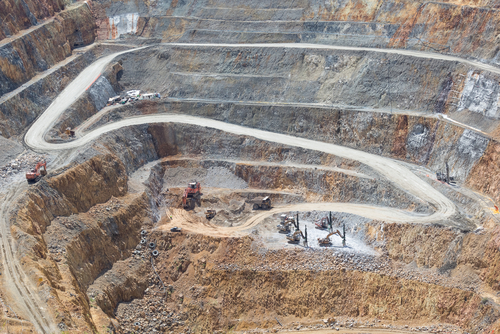 At the beginning of every month, I brief members on how MoneyGeek's regular portfolios have performed and comment on the state of the financial markets. In this update, Ill explain the reasons why oil and gas stocks are featured in MoneyGeek's portfolios, but mining stocks aren't.

The performance of MoneyGeek's regular portfolios for the month of November 2015 were as follows:

I've chosen to list below the performance of some of our competitors. For the sake of brevity, I've decided to show only those portfolios that have a similar risk profile to MoneyGeek's Regular Slightly Aggressive portfolio.

For most of 2015, the U.S. and Canadian stock markets moved in lock step when currency exchange rate fluctuations were unaccounted for. However, that began to change in October and continued through November, as U.S. stocks began to significantly outperform Canadian stocks. I believe one of the reasons for this is because investors see weaker economic growth for Canada than the U.S..

We can attribute much of Canada's economic weakness to what's happening in China. As I've explained in the past, China managed to grow its economy as quickly as it did by building a large number of structures and facilities. Such building activities required a lot of resources such as coal, copper, oil and iron.

As the Chinese economy has slowed down, the global demand for those resources has gone down significantly. Canada, whose economy relies on the export of such resources, has taken a much greater hit than the U.S., who doesn't rely on the export of such resources. The U.S. economy has continued to perform much stronger than the Canadian economy in recent months.

Different resources will respond to China's slowdown differently. If you've been following this site for a while, you'll know that I'm very positive on oil's prospect in the future. That's why I introduced XEG.TO (iShares SPTSX Capped Energy Index) in MoneyGeek's regular portfolios this year. However, I don't feel as positive about metals like copper and iron ore in general (though there are exceptions), so I've refrained from including, say, CMW.TO (Claymore S&P/TSX Global Mining ETF) in the regular portfolios.

There are several reasons why I'm more pessimistic about metals than I am about oil. Let me list five major differences between them.

1. Metals have more industrial uses than oil, while oil has more consumer uses than metals.

Industrial uses include the building of apartments, ships, machinery and so on. Consumer uses, on the other hand, consist of the manufacturing of consumer products. While both oil and metals are used for both industrial and consumer purposes, a higher proportion of metals are used for industrial purposes compared to oil. For example, some two thirds of copper is used for industrial purposes, while that fraction is less than one third for oil, at least in the U.S.

As an example, the Chinese government is currently encouraging its citizens to buy more cars, which is part of the reason China's demand for oil has gone up this year by an estimated 7% even as metals demand has gone down overall. While metals demand could start to go back up, it's not a sure thing, whereas China's oil demand is almost sure to go up again next year as it has consistently for many years.

When a company drills an oil well, the well generally reaches its maximum rate of production in a month or two, and declines from there on out. The rate of decline varies from well to well, but they nevertheless all decline because pressure gradually escapes from the wells. In contrast, mines often operate at maximum capacity for many years because they are limited only by machinery and manpower.

As a result, it takes much longer to reduce the supply of metals than it does to reduce the supply of oil. This allows metals overproduction to continue for longer, which can depress their prices further and longer than for oil. For example, gold production has gone up significantly over the past three years, despite the fact that as many as half of all gold miners are estimated to have been losing money for more than a couple of years.

3. You can recycle metals, but not gasoline.

The primary use of oil is as fuel, and the laws of physics state that once you burn up fuel, you can't turn it back into fuel without spending more energy than the fuel first gave. This means oil is a highly non-renewable resource, so if we want to keep using it, we need to find more by drilling more wells.

However, this is not necessarily the case with metals such as copper. Copper doesn't disappear when we build new apartments or manufacture new electronics. Once those goods become obsolete, we can reclaim a substantial amount of metals through recycling. The more we recycle, the less we need new metals through mining, which is not good news for miners.

4. Metals are easier to store than oil.

While some metals are toxic to the human body, the most common mining metals, such as iron, copper, gold and silver, are not. Furthermore, many metals carry a lot of value relative to their volume. Gold is an obvious example of this, where a single gold bullion measuring 20 by 8 by 4.5 centimetres carries $400,000 worth of value.

Because of these properties, it's relatively cheap to store metals and so the world generally does store a lot of metals in warehouses. For example, even if the world stopped producing platinum, there is enough inventory to satisfy the world's needs for many months.

In contrast, oil is much more difficult to store because it's smelly, liquid and toxic in its unrefined form. Not only that, but oil doesn't hold a lot of value per volume, with 42 gallons of oil fetching less than $40 today.

The abundance of metals inventory allows for wild price swings because speculators can drive prices above or below the "fair price" (the price at which supply will match demand) for years on end. Such wild price swings are not good from an investment perspective.

5. In most cases, miners don't have their OPEC equivalent.

Many of the world's countries are heavily dependent on oil for their national income. For these nations, stability in oil prices is very important, which is why many of them got together and formed OPEC - a cartel with a mission to stabilize oil prices. Although the group is highly dysfunctional at the moment, it eventually will take steps if even its wealthier members start to suffer significantly from low oil prices.

For most metals, however, equivalent cartels don't exist. This is probably because countries are not overly dependent on metals exports to balance their national budgets. That said, there are exceptions. Potash, for instance, has a North American cartel that acts to stabilize prices.

In summary, compared to oil, demand for mined metals is uncertain because of metals predominant industrial use and recycling potential. Also, compared to oil, metals prices can swing up and down further and longer because production is harder to curtail and because there are extensive inventories. Finally, metals don't usually have organizations with a mission to stabilize prices.

Because of these reasons, investing in mining companies is much riskier than investing in oil companies. This is why MoneyGeek's regular portfolios don't specifically include mining related ETFs. If metals prices go down much further from here, I may change my mind, but prices would have to go very low before I can feel confident about including these stocks in the regular portfolios.