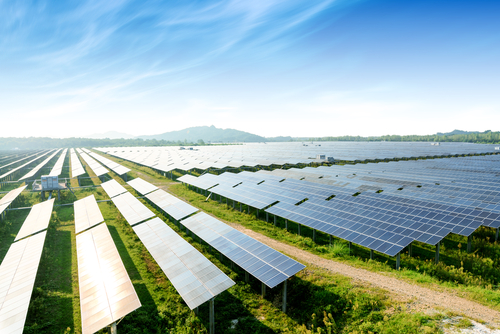 On the third Monday of each month, Ill comment on the performance of the premium portfolios and provide some additional analysis related to individual stocks. In this article, I will present and explain my valuation model for First Solar, a solar panel and systems company.

The performance of MoneyGeek's premium portfolios for the month of October 2016 were as follows:

There was only one stock in the premium portfolios that moved more than 10% last month, and that was VSE Corporation (VSEC) which went down by 13%. There was no apparent reason why VSEC should have gone down. The company did report earnings late in the month, but most of the stocks decline came before the report. Furthermore, there was nothing in the report that would have caused a decline as the reported earnings were at an acceptable level.

Its important to remember that stocks are not priced rationally. The price of a stock often declines for reasons wholly unrelated to the underlying business. Thus, I dont think its worth our time to overanalyze the cause of VSECs price declines.

For the rest of this article, I will explain my rationale for adding First Solar to the premium portfolios in the last update.

Rationale For Including First Solar In Premium Portfolios

The components business involves manufacturing thin film solar cells, which are made from Cadmium Telluride (CdTe). This sets First Solar apart from most of its competitors, who use polysilicon to manufacture solar cells. While thin film solar cells are significantly cheaper to manufacture, they also have comparatively lower energy conversion rates. These properties make them ideal for use in utility scale projects (i.e. large solar plants) where space is abundant, as opposed to on rooftops where space is at a premium.

As a complement to the components business, First Solar also runs the systems business which develops solar power plants. The development of solar power plants involves such tasks as the design of the plant, obtaining permits, and the installation of panels.

You can view my financial model of First Solar using the link below. I will explain First Solars business further as we go through the model.

As with most types of companies I analyze, the valuation model consists of three components: liquidation value, earnings potential and opportunity cost of money. Let me explain each of these components as they relate to First Solar.

Liquidation value refers to the amount of money shareholders would receive if the company ceased operations today, sold all of its assets, and returned the money to shareholders. To arrive at the liquidation value, I examine the balance sheet items of the company and make educated guesses as to how much those items would be worth in liquidation. The value of an asset or a liability reported using accounting rules can sometimes differ substantially from liquidation value.

My model pegs the liquidation value of First Solar at about $3.7 billion, below todays market value of the company, which stands at $2.9 billion. This means that if you bought First Solar shares today and the company liquidated, you would theoretically make a profit. Such situations are unusual, and I believe this makes First Solar a relatively safe bet.

First Solars liquidation value is so high in large part due to its unusually large cash balance. As of September 30, 2016, the company had $1.4 billion in cash and nearly $0.7 billion in marketable securities, which are investments that can be converted into cash very easily. These assets alone cover almost all of the companys liabilities, including all debt, accrued expenses, and warranties. The rest of First Solars assets therefore amount to $3.7 billion.

Speaking of warranties, you will notice that Ive modeled a higher value for warranty provisions ($493 million) than was stated by First Solar ($329 million). The stated amount is an estimate based on assumptions, such as how many solar cells will need replacing in the future. If the assumptions are off, First Solar could be on the hook for higher warranty related expenses, so I modeled a higher warranty provision to be conservative.

A company usually incurs restructuring when it downsizes a subsidiary. The charge can involve some cash outlays, particularly if they lay off workers and pay them severance. However, the restructuring charge is usually mostly non-cash, as its merely an accounting declaration that says the subsidiary is worth less than it was before. Ill explain what this means using First Solars example.

First Solar expects to record a huge restructuring charge of roughly $650 million in 2016. There are two main components to this charge.

Since First Solar bought TetraSun, however, First Solar was able to significantly improve the sunlight conversion efficiency of thin film cells. This year, the company determined that they wont need TetraSuns technology after all, so they decided that the assets they acquired from TetraSun were not worth as much as they had previously thought. The extent of the downward revision of TetraSuns assets is recorded as restructuring expense.

The second major component of First Solars restructuring expense relates to their old equipment. First Solar produces different types of solar modules, named as Series 4, 5 and 6. Series 4 is the module thats currently mass produced. Series 5 is a new module whose production was supposed to start next year. Series 6 is an even newer module that was originally stated to appear in 2019.

Unfortunately, recent events threw a monkey wrench into the companys original plans. The price of solar cells has been going down for many years, but the pace of decline accelerated since the summer of this year. Prices have now declined such that production of Series 5 modules will no longer be profitable.

First Solar therefore made the difficult decision to cancel plans for the Series 5 and, at the same time, accelerated the timetable to bring Series 6 into production. This again incurred restructuring charges since all the assets related to Series 5 production were now deemed worthless.

Of the $650 million in total restructuring charges the company is expected to incur this year, less than $100 million are expected to be cash expenses. The rest of the expenses are just a re-statement of how much the companys assets are worth. This latter kind of expense has little effect on the companys liquidation value, and since we define earnings to be the change in liquidation value, I adjust the earnings to add back this non-cash component of the restructuring charge. This is why you see $550 million added back to earnings in my 2016 earnings estimate of the company.

Even with the adjustment, however, my model shows that First Solar is on track to make $180 million this year, which is substantially less than the roughly $500 million per year it used to make. The next year looks even less promising. According to First Solars management, the company will barely make any profit in 2017. This is mainly because of the rapid fall in solar module prices I mentioned earlier.

As if thats not enough, demand for solar panels is set to drop next year, to roughly 60 GW. China announced a reduction of its solar subsidies, and European countries have been gradually decreasing their subsidies as well. Currently, the industry needs these subsidies for solar plants in order to produce panels that are economical for its customers.

In order to survive, many solar companies have cut prices to the point where they barely make any money. In some cases, they have bid on projects at money losing prices, in order to avoid losing even more money by idling plants.

Since most solar companies recorded such low profit margins in 2015, they are almost certain to lose money this year, and lose even more in 2017. If this goes on for much longer, solar companies will have to reduce manufacturing capacity. Such events will increase, or at least slow down the pace of solar cells price reduction in the future.

This inevitable lift to solar cell prices, combined with substantial cost reductions due to the introduction of Series 6 modules, should make First Solar profitable again by 2018. Thus, though theres pain for First Solar in the short term, I believe the companys long term future is bright.

Over the very long term, there are a couple more reasons why we can be positive about First Solars future. The solar industry has been very good at reducing costs in recent years. If this trend continues, experts believe that soon, solar generated electricity will become cheaper than fossil fuel generated electricity, a phenomenon known as grid parity. The estimate of when solar will reach grid parity varies, but it ranges between 2017-2020.

Once solar power achieves grid parity, I believe the demand for solar energy will soar. Currently, solar generates only 0.6% of electricity in the U.S., whereas coal plants generate 33%, and natural gas plants generate another 33%. Both coal and natural gas will become more expensive over time, whereas the cost to produce solar power will only become cheaper. It will take many decades, but solar should replace a substantial portion of power generated by coal and natural gas.

The adoption of solar should accelerate, especially if governments around the world support it with incentives. Currently, many are worried that Trump and the Republicans will reduce subsidies for solar. However, those people wont be in power forever, and their policies could accelerate climate change.

In the coming decade, there is a significant chance that well start to see some dramatic effects of climate change. Rising sea levels could displace millions of people. We could see stronger and more frequent hurricanes, droughts and floods. Currently, government policy is held back by those who deny that the climate is changing. But if climate change becomes undeniable, governments will have no choice but to adopt policies that will reduce our consumption of fossil fuels. That can only be good news for solar.

Because of these reasons, Ive modeled a 5% growth in First Solars income in the foreseeable future. Also, using 2016 earnings as a normal year of profitability, my model states that First Solar is worth $41/share. As of the time of this writing, shares are trading at $31, which means I believe First Solar is substantially undervalued.

Since I introduced First Solar to the premium portfolios last month, First Solars price already plunged by 20%. Though I wish I could have timed the inclusion of the stock better, I couldnt have foreseen the 20% drop. Also, given the poor short term outlook of the company, share prices could drop further. However, the company is nowhere close to going bankrupt, and I believe it will prosper in the long run.